With the passing of the equinox, spring is in the air and a flood of nostalgic adventures past mean that summer cannot get here soon enough. Each season has its merits, but for me, summertime is my recess, full of silly games and shenanigans.

A true summer morning in the high mountains begins encapsulated in a somber, blanketing chill, a reminder of summer’s fleeting presence. Nestled in a sleeping bag perfectly suited to these nighttime temperatures of the Uinta Mountains, I jolted awake at the urging of my friend’s flashing headlamp. It was a July morning, 3:00 A.M., and time to get on the move. 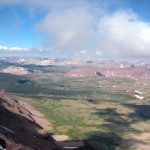 From atop King’s Peak

Just the day before, three friends and I had ascended the highest peak in Utah. From the fantastically colored, lichen-adorned boulders of King’s Peak, I had entertained for the first time the thought that falling off a mountain was indeed a very real possibility. Now, at this seemingly ungodly hour, we broke camp and prepared to backpack back to the realm of paved roads and responsibilities.

I layered on clothes in a feeble attempt to retain the snug warmth of my sleeping bag. Bumbling out of the tiny tent, every abrasive sound seemed especially coarse and out of place in the slumbering silence. The pre-dawn air zapped me awake, an exhilarating rush that filled every pore with a buzz of refreshment; this is what it means to feel alive. I looked around, taking in the stillness; the only beings I saw moving were my other adventure crew members. Surrounded by mountains older than the mind can reasonably comprehend, our little camp seemed feeble and a fleck in the landscape. Off to the west, a perfectly full moon hung over the tips of the Uintas, a glowing orb waltzing slowly off the sky’s stage. Never before had I seen the moon look so close, nor pulsate with such an incandescent, creamy light. It seemed as if one could reach out and knock it from its plump place in the sky, start a cosmic game of soccer.

My friends and I swiftly packed up camp. Lost in our own thoughts, we didn’t say much as bags and pads were rolled up and stowed away. Nibbling on a cold granola bar, I watched as the moon dropped out of sight, stage fright getting the best of her. Turning, I forced the rest of the granola bar down- my body did not seem willing to eat at such a bizarre time. The sky retained the peculiar light of anticipation of the coming sun; the mountains were purple silhouettes against the horizon. Camp broken, we began our trek out.

We hiked damp single track in single file, each of our headlamps a warbling dot of

insignificant light. The world was quiet but tingled with an unfamiliar energy. The landscape remained shadowy and we remained silent, save for our footsteps. Ever so gradually, color began to seep back into the land. The bruised sky lightened like watercolor, a flow of pale hues from the east. At once I felt more grounded than I ever had before. Until then, I had never experienced truly living in the moment. It’s a feeling I struggle to encapsulate with words. How is one supposed to describe the swelling of your spirit, a feeling so real that your heart overflows and your mind is at rest and the only thing that matters is your next breath, the next footfall, the smell of dew? Paradoxically, the more connected to the earth I felt, the more out-of-body the experience became.

After about an hour and a half or so of meditative hiking, I recalled a passage from Edward Abby’s Desert Solitaire. He spoke of his flashlight as a handicap, a beam that isolated him from the environment. Thinking this, I turned my headlamp off and allowed my eyes to adjust to the young morning light. Satisfied, I trifled with the notion that Abby would be proud and allowed myself a small smile.

Time ceased to exist as we continued onward. Dawn finally began unfurling her fanfare of colors. The far horizon blushed incredible shades of peach, gold, and purple. The sky lightened to my favorite Columbine-blue. The stunning array continued to unfold as we walked. Mother Nature truly is the richest queen the earth has ever seen, for no kingdom or empire could possibly come close to matching the splendor of the sunrise. Threads of shimmering, warming gold lanced through the trees, simultaneously blinding and illuminating. The morning sky flared in color further as the sun rose from its cozy sleeping place. Fingers of light softened the landscape; plants awoke and added palpable energy to the air.

We reached the trailhead all too soon. For a while, none of us said anything. We communicated in short sentences, all clearly moved by the experience. Our hike out from the valley below King’s Peak was spiritual, touching in a sense that must be experienced rather than captured in words. The intense calm and wholeness felt in that morning left a mark on the soul. Hearts happy and spirits reinvigorated, we bumped down the dirt roads with rumbling stomachs, looking forward to a hot breakfast back in civilization.