Why are they called the La Sals? 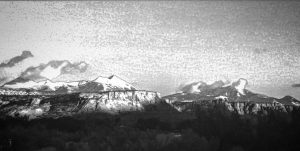 Naming of the La Sals

During the colonization of North America, the Spaniards pushed North and West from Mexico, in search of  GREAT cities of Gold. One of the best routes from their stronghold in Santa Fe, to the southern reaches of California, was through the Moab valley. Several things drew them and their Old Spanish Trail to this area. Natural fresh water springs (Old City Park), an easy river crossing and a prominent land mark, the La Sals. One of the first times a Spanish party passed through this area, it was hot and dry in the desert valley floor, yet the mountains were still white with snow. To the Spanish it seemed inconceivable that there could still be snow in the mountains with how hot it was down in the valley. So they thought that the mountains were surely made of salt, hence they called them Sierra de la Sal or Mountain of Salt. It was also noted in the journals of the Spaniards that the Natives gathered salt from the flanks of the mountains. Being that the Spaniards were the primary users of the Old Spanish trail for many decades, the name took hold and has held to this day.

The Spanish were not the first humans to travel through this area. Various Ute tribes resided around the base of the La Sals and they referred to the Mountains as the ‘Elk Mountains’, which was also used by the first Mormon settlers in 1850. After being chased out within the first year, settlers did not return to the Moab valley for 20 years. At which point various accounts refer to the mountains as the La Sals thus the Spanish name officially took hold. Meanwhile the Navajo nation to the Southwest referred to the range as the ‘Five Peaks’. To learn more about the history of the Sals and the naming of the peaks, stay tuned for…..History facts about Moab #2