Home Of Truth: Marie Ogden’s Attempt to Raise The Dead

About 45 minutes south of Moab, an old ghost town right off of Highway 191 still stands. The now gated private property was once a secretive, carefully constructed compound belonging to a radical religious commune, Home of Truth.

Marie Ogden and her Seekers Of Truth practiced anything from resurrection to fundamental doomsday preparation. Church Rock, a curious and unlikely outcropping just next to the turnoff to the Rock Climbing mecca of Indian Creek and The Needles District of Canyonlands National Park, was Marie Ogden and her Home Of Truth’s center of the universe. 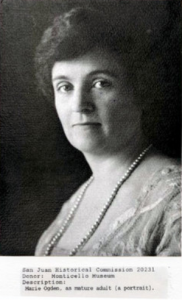 Marie Ogden was a wealthy and affluent member of Newark New Jersey’s political scene. She was the President of the New Jersey Federation of Women’s Club and a philanthropist that gave generously to the welfare of the poor. She enjoyed life as a New Jersey socialite and lived an affluent lifestyle. In 1929, her husband, Harry, passed away suddenly. This event would change Maire Ogden’s life forever.

Upon becoming a widow, she sought spiritualism to understand the death of her late husband, Harry. She soon found the works of fascist and spiritualist William Dudley Perry. Perry had claimed that he possessed the ability to levitate, and have out of body experiences that transported him to other-worldly places. He also claimed that he had personally conversed with The Lord and Saviour Jesus Christ. He documented these experiences in his book Seven Minutes in Eternity: The Aftermath. Marie became fascinated by his particular brand of Spiritualism, especially his theory that there will be a golden age of paradise before the end of times. She used Dudley’s experiences and teachings to begin to develop her brand of Spiritualism. 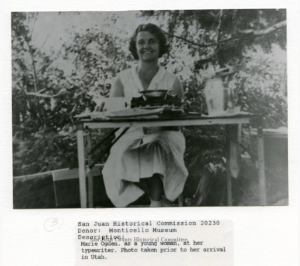 Marie Ogden at her typewriter. Courtesy of San Juan County.

Marie was a strong proponent of  The Aquarian Gospel of Jesus Christ. The lost gospel describes the 18 missing years of Jesus Christ’s life. During these years, Jesus was thought to have traveled to India and learned of eastern traditions of Religion. Her teachings contained ideas primarily based on the Aquarian Gospel. Particularly the concepts of reincarnation and strict asceticism, which means giving up all worldly possessions and indulgences for a simple life. She believed that these practices would aid in preparation for the coming age of Aquarius.

She believed, like many eastern traditions, that one could achieve a higher state of consciousness through extreme self-deprivation. In doing so, she would possess the powers of reincarnation or Rebirth Of Soul. She also believed that by following a strict doctrine and devotion to these teachings, she and her followers would achieve status as the chosen ones and would survive through the inevitable apocalypse to come.

One of Ogden’s most prominent teachings was that of a three-stage catastrophe that would take place before the end of times and the second coming of Christ. An age of darkness, followed by economic destruction and other natural devastations, and finally, an earthquake that would wipe out most of humanity. This apocalyptic event would also reconfigure the geography of planet earth.

Finding the Home Of Truth

Marie Ogden founded an occult group named the School Of Truth and began a spiritual journey from New Jersey to the West in search of followers. She claimed to be receiving revelations from God through her typewriter, which guided her in a crusade to spread her brand of spiritualism. Eventually,  she was called upon to establish a permanent community in the intermountain west to prepare for the end of times and the beginning of the aquarian age.

She first sought out land in Idaho, but could not find anywhere in the state that matched her vision. She returned to New Jersey, where she received a letter from a friend. The letter contained an image of virgin land in the intermountain west that fit her revelation. She immediately traveled to Utah and was amazed to find that property in San Juan County matched her vision perfectly.

Her vision consisted of a peculiar rock outcropping that was particularly unique to the surroundings. This prophesized geologic structure was Church Rock. According to Marie’s vision, Church rock was on the Axis of the earth and was, therefore, immune from the effects of the impending great earthquake. She also received that it would be the exact location for the second coming of Jesus Christ. She saw visions of water returning to the area, creating a paradise and haven unique to itself in all the world. 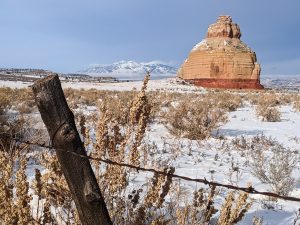 Moving to the Home Of Truth 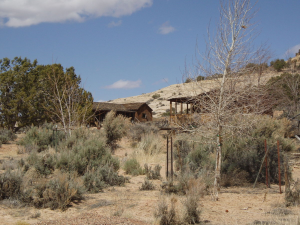 Marie was self-prophesied to be the reincarnation of the Virgin Mary. She would also receive revelation that other members of the Home Of Truth were reincarnations of religious and biblical figures. Such as Brigham Young and the prophet Nathan, among others.

She established a complex that consisted of an outer portal where her followers took residence and an inner portal where she lived and taught — moving from the external portal to the internal portal represented a transcendence into a higher state. The inner portal’s construction lined up perfectly to Church Rock, providing a straight view to the site.

Marie also purchased the local newspaper, the San Juan Record, out of Monticello. She began to publish articles and columns detailing her beliefs and teachings in the paper.

Life at the Home Of Truth

Her following of 20 soon grew to 100 in 1934. Followers of the School Of Truth were to follow strict rules and regulations. They were to give up all worldly possessions, money, and time to the community. They were to abstain from sex, alcohol, tobacco, and other vices. All followers maintained a vegetarian diet, except when the community garden did not produce enough food to feed them. 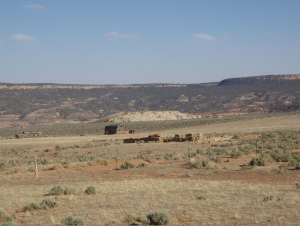 Remains of the Home Of Truth. Wikimedia Commons

Men were to work on the farms and mine gold and other ore. Women were to take care of chores and other domestic duties. Marie Ogden was very strict in her rules and doctrine, and all laws commanded obedience without exception. She maintained that self-deprivation and radical, simple living was the only way to reincarnation and purity in the eyes of the lord.

The Death and Reincarnation of Edith Peshak

On February 11th, 1935, a member of the community, Edith Peshak, died of Cancer. Instead of burying the body, Marie proclaimed that Peshak had not died, but transcended into a state of “Purification” from which restoration of spirit would occur. Under the careful supervision of Ogden, community members washed the body three times per day in a saline solution. They also administered milk and egg enemas daily to nourish and preserve Edith’s remains.

Marie Ogden claimed to have received ongoing visions and messages from Edith’s soul from another realm that ensured and expressed eagerness for her return to her earthly body.

Word of the remains eventually got out, and the Sheriff paid a visit to the compound in June 1935. The community was legally allowed to keep the corpse because by then, it had been effectively mummified and did not pose a public health threat. In February 1937, Marie announced that Edith was about to come back to life.

Upon the discovery of this announcement, Marie was arrested and forced to sign a death certificate for Edith Pashak. The body remained concealed, though accounts of private cremation circled. During those two years, the community had lost a large number of members as press coverage of the controversy surrounding the corpse became a national headline. The Home Of Truth colony dwindled, and by 1940, there were only nine remaining members.

After the Home Of Truth 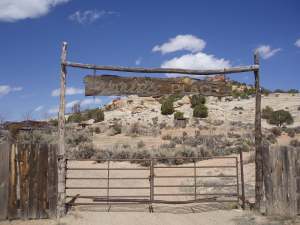 Entrance to the compound. Wikimedia Commons.

Marie Ogden and seven of her followers remained in the complex for at least nine years. In 1949, the San Juan Record newspaper sold, and Marie moved into a nursing home near Blanding, Utah. She died there in 1975. Several members of the Home Of Truth remained in the inner portal. In 1977, the property auctioned off. The new owners are working to restore the property and will eventually hold tours of the inner portal compound. It is currently a gated private property with no trespassing signs surrounding the area. Today, while driving to Canyonlands and Indian creek, you may see a sign labeled “Marie’s place” if you look close enough.

If you need some inside info on this story, or advice on other great adventures to make your visit to Moab memorable, stop by Moab Gear Trader. Conveniently located near downtown at 300 S. Main St. Moab, Utah.