What Type of Cross Country Skiing Should You Choose?

So, you are ready to get into cross-country skiing. Now you need to choose the type of skiing that will best suit your ability. Your choice needs to provide the most enjoyment for your investment in time to learn the skills necessary to be competent, and money expended on your new ski cross country ski gear. This article will help you decide what type of cross country skiing you should choose.

One of the first things you notice while doing your research is that there are several different types of cross-country skiing with the two most prevalent being classic cross country skiing and skate skiing. 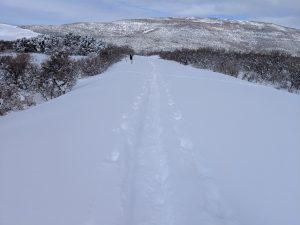 When Did Skate Skiing Develop?

Skate skiing developed in the 1980’s. Professional ski racers learned that by adjusting the way they used their legs during the ski motion they could generate more power. This innovation added more speed and acceleration to the sport. It was an American skier named Bill Koch who used this technique to win the 1982 World Cup Ski title. The controversy surrounding his new ski style led to the creation of a new ski race category called freestyle. Classic cross-country skiing is the more established and traditional style. Both types of skiing are great exercise and outstanding ways to get outside in winter. The one that is best for you can depend on a few factors discussed below.

The movement of skate skiing generates power through alternate lateral leg pushes similar to ice skating.  Skate style skiing activates the arm and core muscles by using ski poles to generate more power. This movement differs from classic cross-country skiing. It mimics walking where the legs and arms move in equal and opposite motions. This action propels the skier down parallel groomed tracks.

Am I in Good Enough Physical Condition to Cross-Country Ski?

If you are wondering if you are in good enough shape to skate ski be aware that it is a very physically demanding activity that will give you one of the best cardio vascular workouts available. However, a reasonably active person with no health or mobility limitations should be able to pick up the sport. If you have any concerns see your doctor before beginning strenuous exercise.

If you are in need of advice or would like to see a pair of skate skis stop by Moab Gear Trader to speak with one of our outdoor professionals. Remember, it is important to take it easy when learning a new activity and a positive attitude goes a long way. Putting the time and energy into becoming proficient in skate skiing or classic cross country skiing will open up a whole new way to enjoy the outdoors.