The Moab area has no shortage of interesting sites, but the native rock art is among the most intriguing. The history of this desert community is literally written on the walls. Pictograph panels and Petroglyphs give us a glimpse into Moab’s ancient past. Who were the people that inhabited these red rock canyons and created this rock art. What are their stories?

The Ancestral Puebloans and Fremont cultures created the majority of the rock art in the Moab area. These tribes inhabited the Four Corners region from around 1 AD to 1301. They were among the first of historic native’s to establish communities that remained in one place for long periods. The adaptation of the bow and arrow allowed for efficient hunting practices. The ability to efficiently grow sustainable crops such as beans, squash, corn, and nuts supplemented hunting and together provided communities with enough food for all. With a steady source of sustenance, the Fremont and Anasazi were able to sustain communities and have families. They were also able to create art, make pottery, and build elaborate cliff dwellings that have lasted thousands of years.

When we look at the remnants of the ancients, it can be a little challenging to understand what exactly we’re looking at. There are several different styles of art found around the Moab area. Some are prehistoric, and some may be a bit more recent than we might expect. It’s complicated to say definitively who created which panels, but the art style’s give us some clue as to who may be responsible. 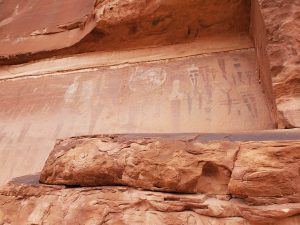 The Barrier Canyon Style is the earliest art style that has been found in the area. Barrier Canyon includes anthropomorphic, ghostly figures, and squiggly lines. The style emerged somewhere between 1,000-4,000 years ago and likely originated with the basketmakers of the late Archaic period. The art is easy to identify, as it tends to be pretty spooky and thought-provoking. You can find examples of Barrier Canyon style at Courthouse Wash in Moab and various other places in Canyonlands and the San Rafael Swell. 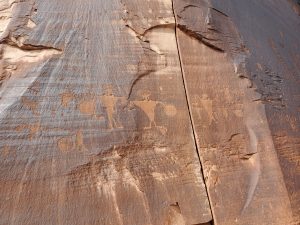 The Fremont Culture resided in the Four Corners Region during the Formative period from around 1 AD to 1301. Fremont’s inhabited the region at the same time as the Ancient Puebloans or Anasazi but were not affiliated. The Fremont cultures were subsistence farmers and inhabited dwellings known as “Moki Huts.” The art style is up to 2,000 years old and is characterized by human-like trapezoidal figures, often with horns and shields, as well as swirly patterns. There are a few examples in the Moab Area of this art style, even though the Fremont culture was not very prevalent in the Moab Area. The photo is Fremont style art on Potash Rd. 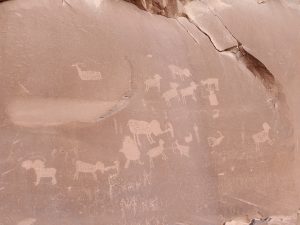 The Ancestral Puebloans or Anasazi created the majority of the rock art in the Moab Area during the Formative period from around 100 AD to 600 AD. Anasazi is a Navajo term meaning “Ancient Enemies.” because of the negative connotation, archeologists now refer to them as Ancestral Puebloans. The tribes are known for creating large, elaborate villages like those found in Mesa Verde and Chaco Canyon. The art style includes anthropomorphic figures such as the Kokopelli Man, a hunched over figure often playing the flute, as well as bighorn sheep, deer, and other geometric patterns. The Anasazi Style often depicts hunting scenes and humans wandering about next to bighorn sheep and deer. The examples of Anasazi Style are straightforward to find in the Moab area as they created most of the art. A great example is the rock art panel located near the Poison Spider trailhead.

The ancient art found in Moab is among the most unique in the Four Corners region. Taking a stroll through these ancient art galleries is a must-do activity for any vacation in Moab. Come into the shop for any last-minute supplies and speak with our gear experts for advice on which panels to visit during your stay in Moab. We are happy to spread our local knowledge and ensure you get the most out of your stay in Moab.

About the Author: Jason Ringenberg

Jason Ringenberg is a Writer, Skier, Snowboarder, Rock Climber, Vanlifer, and lover of all things outdoors. He is originally from South Lake Tahoe, CA. When he's not stealing Wi-fi and writing from his laptop, you'll likely find him in the mountains. He doesn't enjoy walking uphill, but for some reason, he spends most of his time doing just that. Check him out on Instagram @JasonDavidRingenberg

Cold fingers make it hard to enjoy playing outside

New Stickers! The powder in the is as elusive as

The sun is in charge this time of year.

Conditions on the Nordic trails are spectacular.

It's cold out! Keep your fingers warm with new be

Lots of amazing photos of last night's sunset in o

It's nice to have the mountains white again, even

Bring on Monday! We are open 8am to 9pm every day

At least the 18% snow pack is good for something..

The spirit of Warren Miller is alive and well at G

Mount Mellenthin pierces the sky above skiers in H

From our family to yours: Happy holidays and thank

Check it this corduroy up on top of Geyser! There

There's some beautiful grooming up there right now

Skis and grooming today! We are fully stocked in

Sun's out, guns out! Geyser Pass road is not plow

We are so fortunate to have the Geyser Pass Winter

If you enjoy skiing corduroy, today would be a gre

Check out this 3.5 lb. Titanium wood stove for win

What a difference a day makes! It looks like 12 i