On Finding My Glide – Nordic Skiing in the La Sal Mountains

Although the 2017-2018 winter has produced an unusually low snowpack across most of the western united states, in some places there’s just enough snow to get out and play. I set out on an adventure on Monday, January 15th to finally slide on snow, something I’ve loved since my childhood. Except this time I was going to try something new, Nordic Skiing, rather than the traditional alpine I’ve stuck closely with. The mighty La Sal Mountains have enough snow to adventure out onto, having been groomed several times already this winter, thanks to the volunteer work of those passionate about snow play.

When a girlfriend and I arrived at the Geyser pass winter trailhead, the temperature was a crisp 35 degrees, no wind in the air and abundant sunshine. So much sunshine that any snow below the trailhead was sparse, and tall brown grasses stretched their way towards the sky. I didn’t let the scarce winter scene bring me down, and we continued to get our equipment on, spandex, sequins, tutus, the whole nine yards. After spending an embarrassingly long amount of time trying to clip into my NNN bindings, we glided from the parking lot and onto the groomed track. Things looked less bleak here, snow in the tall pines, footprints from those brave enough to venture off the groomed trail. It felt like winter here. My poles being the only thing between a faceful of snow and myself, I tried my best to mimic the kick and glide motion of those around me.

Geyser pass to the Gold Basin Road is the perfect intro to Nordic skiing in my opinion. Right out of the gate you deal with some of the hardest parts of the track, a slow but steady incline to the base of Glass Hill, which rewards you with a short flat area on top to take a break. Let me tell you; I reveled in that break. I consider myself to be a somewhat fit and active person, but I never expected the workout that Nordic skiing is. My arms, specifically my shoulders, felt like silly putty, and all of my thigh muscles were begging me to stop. My core muscles shared those feelings as well, staying balanced on Nordic skis is a workout in itself. Lean too far forward, or too far backwards and you’re on the ground in a tangle of equipment.

I persevered, my slight suffering could continue once I was safely home on the couch. We made it to the Gold Basin junction and started trekking up the neverending hill. The La Sals are incredible mountains, and I swear they’re the only place where it might just be possible to travel uphill both ways. After the curved, steep hill on the Gold Basin Road, we come to another short flat before our first big downhill. The calm before the storm. I started picking up speed, but my girlfriend passed me quickly. In the biggest “pizza slice” imaginable I started to glide down the hill. “I’m doing it!, I’m doing it!” I shouted to my friend. Her huge smile was likely due to me looking like a shaky baby giraffe. But as I came around the corner, the sunshine turned to shade and my skis came to a halt. “Kick and glide, kick and glide” I repeated to myself, as I physically pushed myself down the hill, watching my friend slide by with ease. It was in that moment I looked down at my skis and wondered what was the last time they had a good wax.

Ski wax, so mysterious and temperamental. Another fine art in the world of Nordic skiing, Nordic wax has different applications. Hot or “cold” waxing, different temperature grades for different types, all sorts of buffers and scrapers, consistencies ranging from goop to a solid candle like wax. Usually, I pay someone to do this type of thing for me. Tempted to learn, I wondered, was it for 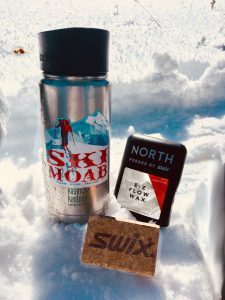 me? Could I learn the ways of the multi-foot long glide that I longed for? After reaching the bottom of the hill and passing “Talking Mountain Yurts” Gold Basin Yurt, which tempted my soul with its hearty stack of firewood and stovepipe that spoke of warm nights spent relaxing with friends, I stopped and checked in with my friend. She noticed that I was working overtime and asked if my skis had been waxed recently, I had no clue when the last time my borrowed equipment had a loving touch. Pushing myself to the end of the road, I felt a sense of accomplishment. A place I had been to so many times before felt that much sweeter being reached on skis. Late afternoon sunshine was drifting behind the almost 13,000 foot peaks, and my sweat began to evaporate into a frosty baselayer. I could only enjoy this moment for a short time, and I didn’t want my first experience Nordic skiing to become a cold hike across a dark forest service road. We traveled back uphill once again, passing the yurt and finally up onto the flat stretch. The rest of the way from here would be generally downhill, I secretly sighed a sigh of relief, mostly for the fact that soon there would be food. There is nothing sweeter in life than the post ski meal. My tired body craving calories and carbohydrates, I imagined the impending feast. Visions of French toast danced in my head.

My girlfriend pulled out her ski wax and suggested we get to it, so we could rip it on the downhill portions back to the trailhead parking lot. She pulled ‘North” by Swix, Mountain Freedom Wax from her pack and tossed it to me. Quickly explaining just what I needed to do with it, I started rubbing it all over my ski bases. A thin bluish coating shined on the undersides, the slight gleam in the sunshine hinting at a speedy descent. I massaged the wax in small circular motions, and buffed it up as nice as I could. I put the cap back on and tossed it to my friend, watching as she repeated the process on her newer equipment. “Wow, that was easy” I exclaimed. Almost too easy. I remember how mysterious waxing felt to me earlier in the day, and sure, I wasn’t even diving into the hot wax aspects, but for out in “the field” it was an unimaginably quick fix.

After adding a few more cold weather clothing layers and spending a couple of silly seconds kicking snow off of my boots, I clipped back into my skis and started pushing towards the downhill. I slid down the hill, gaining speed quickly. I used my alpine ski knowledge to stabilize myself, bending my knees and tucking down low to further my overall distance. It was perfect, the marriage between the skis, wax, and snow was a beautiful one. I traveled without a care, kicking and gliding my way through the golden hour. I felt unstoppable, and I understood the allure of Nordic skiing. It can be so graceful and well put together with minimal efforts. We came around the corner and flew down Glass Hill, I conquered the final downhill of the day with a wide smile. The parking lot was a welcome sight; I was sore and achy, but felt a strong sense of accomplishment. I knew that tomorrow I needed to head to my workplace, Moab Gear Trader, to dive into the ski wax display, so I could be better prepared for my next outing. As the day faded, we loaded up the van and headed down Geyser Pass. Greeted by a beautiful sunset, oranges and pinks flooded the sky, the Henry Mountains taking on their black silhouette. A sweet end to a wonderful day.

The next day, I went to my work and asked my boss Marshall to walk me through the basics of just what I would need. He helped me decide on the “North” by Swix, Mountain Freedom Wax, which is what I had used the day before, but this time I threw in a buffing cork, which is felted on one side to better massage the wax into the ski base. Such a simple kit, and since we’ve had so much temperature variation on the snowpack this season, an “all temperature wax” seemed like the best fit. Satisfied with a purchase that I had familiarity with, I put the items in my pack and prepared for the next days’ outing. My muscles demanded more skiing, and I brought another newcomer with me, I wanted them to experience the beauty of the Nordic skiing world. Before we even set out, 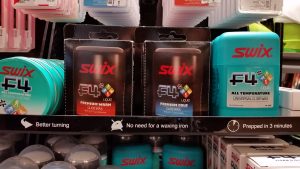 I pulled my trusty waxing kit out of my pack, feeling like a pro. Bases waxed and ready to go, we started another slightly comical ascent of the track, and I felt at ease knowing that I wouldn’t have to work nearly as hard as the last time. I’m happy to have discovered the importance of ski wax, and to demystify the process around using it. It made for a better day with far less pushing, and far more of that gentle glide that all of us Nordic skiers crave. Wax will definitely always be a part of my winter adventure kit, and I recommend it to anyone looking to slide over snow with smile on their face.

We hope your Wednesday is fantastic and you can sh

Guess what tomorrow is!

We had a fresh dusting on the La Sals yesterday an

We can't stop thinking about the river! Do you ha

Wall Street from above. What's your favorite rout

How was your weekend? #moab #utah

Who's ready for the river! We are. Come on down

Old Toyota spotted on Moab Rim! No it's not Bill.

It must be spring because the Jeep flowers are spr

We love the La Sal Mountains, how about you? From

Lookin' great down there Moab! There are plenty o

The sun is shining at 300 South Main. Get out and

You asked! We provide! Our neoprene koozies are ba

Snow! The south end of Spanish valley due to its e

The clouds parted just before the sun went down in

It's that time of the year. Should we go skiing, o