The classic desert rock climb ‘Jah Man’ on the Sister Superior formation has seen incredibly substantial rockfall. So much so, that a significant part of the route has been reduced to a pile of rubble. I was up there today to assess the damage. Here’s a photo comparison. 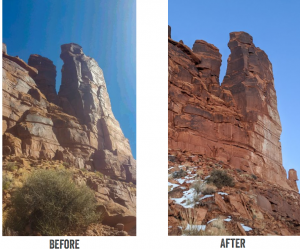 Sean Lillis provided the before photo.

Greg Child, Castle Valley resident and the author of the original Mountain Project Post, informed me that residents of nearby Castle Valley heard the rockfall as it occurred on January 3rd, 2020. Local climber Doug Mcdonald was the first to report the incident when he spotted a plume under the ongoing temperature inversion in the area. Doug and Farland Fish went up Ida Gulch to confirm the event Yesterday, January 12th. However, the visibility due to the temperature inversion concealed the Sister Superior formation. That Inversion has since cleared out, exposing the giant rock scar that was once the Jah Man route.

The entire first and second pitches have fallen off the formation, leaving a blank wall in its place and a gigantic pile of rubble at the would-be base of the climb. 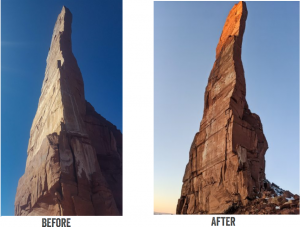 Thanks to Sean Lillis for the before photo.

Though the scar looks featureless, I’m sure it will only be a matter of time before a new variation is established. It will be interesting to see what transpires. Here’s a photo up close. 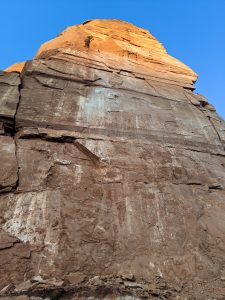 Jah Man was a classic 5.10c route first put up by Ken Trout and Kirk Miller in 1984. It has since become one of the most famous and beloved climbs in the desert. The climbing community will miss this one.