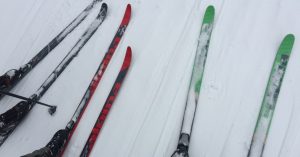 Good morning!  I hope you are well and enjoying this land of contrasts.  It has been a while since I have written an update, but that is mostly due the fact that there has not really been much to report.  There is other exciting news that has also been chewing up our free time here at Moab Gear Trader, so stay tuned over the next few weeks.

Gold Basin received half an inch of snow early this morning.  There is snow in the forecast, and the NOAA NWS point forecst for 10,000′ shows up to 10″ of snow possible today through Sunday.  I have noticed this computer generated forecasts were quite accurate early in the season, but have not been so as of late.  Time will tell, and we sure could use it!  Practically no snow for 2 weeks has obviously affected the snow pack.  Our high 180% of Average SWE at the end of January has dropped to 144% today, but hey, we’ll take it!  Backcountry conditions have been spring like, with several nights of freezing temperatures starting to grow some corn up there.

The track has not been groomed since 2/3/17.  White it isn’t corduroy, the surface has been plenty firm enough for all of your Nordic skiing pleasures.  Challenging wax conditions exist, so stop by the shop for advice and a full selection of Swix tuning supplies

The Geyser pass road was scraped and widened and with the intense sunshine over the past 2 weeks, plenty of mud and slush abound.

The real interesting news has been coming out of Jackson Hole and Teton village.  Jackson Hole Mountain Resort ski resort has closed due to 17 steel power poles being blown over earlier in the week and is hoping to reopen Monday.  Wooden poles are being erected currently.  Teton pass has is closed due to avalanches.  Hwy 89 in Snake River Canyon opened and closed several times yesterday, and WYDOT is currently showing it open.  If all that isn’t enough, Snow King Mountain was closed early on Friday due to an in bounds avalanche on a MOGUL RUN!  2 people were able to ski away and noone was hurt.  2 skiers were carried but not buried.  2-3 days of rain caused the slide to release on ground level.