Where Did The La Sal Mountains Get Their Names? 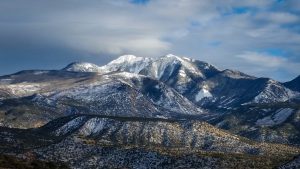 The La Sal Mountain range towers high above the red rock desert in Moab, Ut. In the summer, the towering peaks offer incredible opportunities for hiking, climbing, and mountain biking. In the winter, the snow-covered range lends itself to world-class backcountry and nordic skiing. The contrast between the snow-covered peaks and the red rock formations in the winter months offer stunning and incredibly unique views, especially from Arches National Park. The La Sal Range may also be recognized because of interesting names such as Mt Tukuhnikivatz and Mt. Mellenthin. Upon hearing a name like Mt Tukuhnikivats, it’s easy to wonder where the name came from. The answers are actually pretty interesting. 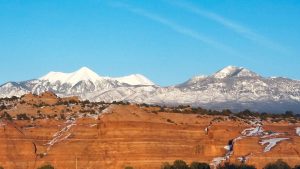 Mt Peale is the highest peak in the La Sals, sitting at 12,721 feet. The mountain gets its namesake from Albert Peale, a talented geologist, and mineralogist that served on the Hayden Expeditions in the late 1800s. Ferdinand Hayden lead these landmark expeditions on a mission to explore and ultimately map significant portions of the northwestern United States. Mt Peale was named in 1875 by chief topographer Henry Gannett on an 1875 survey of the La Sal region on behalf of Albert Peale. The Hayden Expeditions were a significant contribution to the National Parks and preservation of land that we enjoy today. An earlier Hayden expedition that Peale served on occurred in 1871. The team explored and mapped the area of northern Wyoming that would later become Yellowstone National Park. Albert Peale also inspired the names of several other landscape features, including Peale Island, a southern island in Yellowstone Lake, and the Peale Mountains in Idaho. 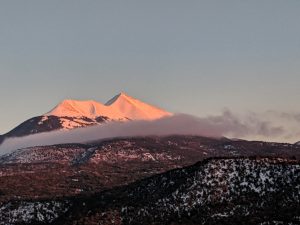 Mt Tukuhnikivatz, another prominent and perhaps the most interestingly named peak, clocks in at 12,482 feet. Mt. Tuk, as the mountain is commonly referred to, was named on the same Hayden survey as Mt Peale in 1875. Tukuhnikivatz is the Southern Paiute word for “place where the sun shines longest” and was named on behalf of prominent members of the Southern Paiute. The tribe also had a second translation which Henry Gannet, the same explorer who named Mt Peale, discovered in 1902. The phrase also translates to “Dirt Seer”. The first translation is the most recognized. 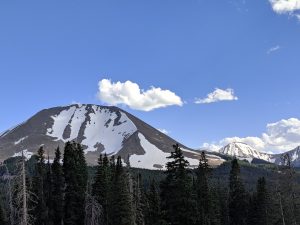 Mt Mellenthin stands proud at 12,645 ft. The mountain has also been referred to as the Middle La Sal Peak. The name Mellenthin has an interesting story behind it. In 1918, La Sal forest ranger Rudolph E. Mellenthin was tracking down a world war one draft dodger named Roman Archuletta who was hiding out in the La Sal Mountains. Mellenthin located Archuletta on a sheep farm near Pine Flats and attempted to arrest him. Upon the realization that he was caught, Archuletta and an associate opened fire on Mellenthin, landing three shots. Mellenthin was killed in the exchange, and Archuletta attempted an escape while wounded. The pair was discovered hours later and arrested. The two were charged and found guilty of second-degree murder. Roman Archuletta served 6 years and was granted parole. The body of Rudolph Mellenthin lies in the Grand County Cemetery.

The towering peaks of the La Sals are and continue to be a huge inspiration to the outdoor adventure community and to outdoor and history lovers from all walks of life. These native Paiute tribes, as well as the early explorers of the Hayden Expedition, are a testimate to adventure in the highest form and there hard work and commitment to exploration will never be forgotten. Next time you head out for a day hike, a ski tour, or a long trip through the La Sals, take a moment to remember the expeditions and tribes that came before.