The Radioactive History of Moab.

Have you ever driven down Potash Rd and wondered what all those tractors are doing next to the Colorado river? The soil they are moving is radioactive, and a very important part of this country’s history. Decades before Moab became the adventure capital it is today, it was the center point for the Uranium mining boom that followed the Second World War. During the 1940s and 1950s, Uranium was discovered in the Moab area. The metal was in high demand by the U.S Government as the key ingredient for use in nuclear weapons technologies. One man’s discovery would create a mining boom similar to California’s Gold Rush. Thousands of prospectors flocked to Moab to get a slice of the radioactive riches buried deep in the red sandstone desert. The aftermath of the Uranium Rush would plague Moab and the desert southwest for decades to come.

Charles Steen and the Uranium Rush.

Soon after World War II, the United States Government was eager to source Uranium from U.S. Soil. The Manhattan Project, the secretive government operation that was responsible for the first-ever Atomic bomb, had obtained Uranium from sources outside of the United States. In order to establish a domestic supply of the element, The U.S Government established the Atomic Energy Act of 1946, which made it illegal for any other person or entity besides the U.S government to purchase Uranium. In doing so, they completely controlled the Uranium market and therefore put a high price on Uranium ore. 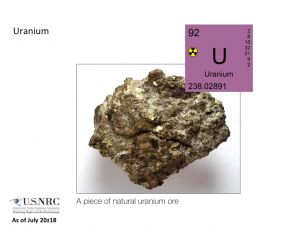 This artificial monopoly created by the U.S Government encouraged prospectors to flock to the southwest desert of Moab, Utah where several small deposits of Uranium ore had been discovered. Charles Steen, a geologist from Texas, was one such prospector eager to see what he could discover. Steen borrowed 1,000$ from his mother and moved his wife and 3 children to the remote settlement of Cisco, Utah. The family lived in a beaten-down shack while Charles tirelessly sought out uranium claims. With no luck, the family was forced to move away from the area following financial hardships. Steen was headstrong and determined in his plight to discover significant quantities of the precious metal element, so the family soon returned to the claims in Utah. Armed with a diamond drill, and unfortunately no Geiger counter, Charles continued his efforts. 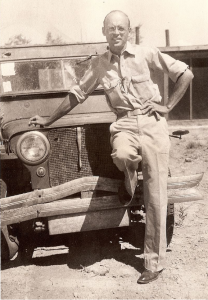 On July 5th 1952, Charles hit it big, though he didn’t know it until later. His diamond drill broke nearly 3 feet before hitting the jackpot. However, he luckily collected a sample from the mining site and brought it back to Cisco where a friend was in possession of a Geiger counter. Upon testing the sample, the Geiger count was off the charts. Charles quickly rushed back to the site and discovered one of the biggest uranium deposits of all time. His claim later named the Mi Vida Mine or “My Life” in Spanish, would usher in a Uranium Rush similar to the Gold Rush in California. 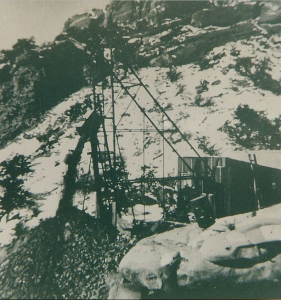 Construction of the Mi Vida Mine. Public domain via Wikimedia Commons

Charles made millions off of the Mi Vida mine and spent it frivolously. He purchased a property on top of a large, prominent hill in Moab and constructed a large home, swimming pool, servants quarters, a greenhouse, and enjoyed an incredible view of the sunset to the west. In modern times, the property is still standing and operational. In fact, it has been transformed into a restaurant known today as the Sunset Grill. Steen received many threats of kidnapping and blackmail as a result of his sudden wealth. As a safety precaution, he built a steel fence with barbed wire lining the top and hired guards to keep watch of the property 24/7. He planted trees and otherwise decorated the property to make the outskirts more pleasant and less prison-like.

Steen’s spending habits became extremely lavish. He purchased a private jet and hired a private pilot which he used to fly to Salt Lake City every week for rumba lessons. He threw very expensive, extravagant parties in his private airport hangar and invited nearly everyone who lived in Moab to them. He invested in Arabian horse breeding, a pickle factory, an airplane factory, and a marble quarry. He also gave generously to the community of Moab. He had a hand in funding the Moab Hospital, as well as purchasing land for many schools and churches. He also founded 4 mining companies to continue his work. in 1961, he purchased a ranch and a 27,000 square foot home in Reno, NV.

By 1960, the U.S government had obtained enough Uranium and announced that they would no longer purchase the resource. This action completely killed the Uranium industry nearly overnight. Steen declared Bankruptcy in 1968 due to lavish spending and back taxes owed to the IRS. 15 years after the Mi Vida Mine discovery, he had spent his entire fortune. Steen died in January of 2006 in Loveland, Colorado.

Our friend Charles Steen founded the Uranium Reduction Company in 1956. The company founded the first major, independent uranium mill in the United States in Thompson, Utah that same year. During the operations of the mill, around 1400 tons of ore were processed per day. The result of the processing and refining of the ore produced a substance known as Yellowcake Uranium. Yellowcake Uranium was produced by first running uranium ore through a series of crushers and grinders. Next, acid, peroxide or alkaline solutions were combined with water to draw out as much uranium as possible. The result, often black or brown and not always actually yellow, contained approximately 80% Uranium Oxide. The yellowcake substance was then sold to the United States Government for use in nuclear weapons technology. 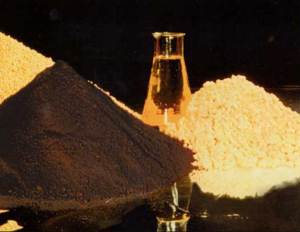 In modern times, Uranium is used mostly for nuclear power plants. The United States currently produces around 7% of the Uranium needed for the 60 Nuclear Power plants and 98 reactors operating in the States. The rest is imported from Canada, Australia, and Kazakhstan. The White Mesa Mill, 7 miles from Blanding, Utah still processes Uranium and Vanadium. It is the only operating conventional mill in the United States, however, there are six other processing facilities in the country.

The hazards of Uranium mining were largely overlooked in the 1940’s and 1950’s and very little protections were put in place for employee’s of the mines. This neglect caused a staggering increase in lung cancers and other diseases and conditions related specifically to the inhalation of Radon gas and exposure to radioactive materials. 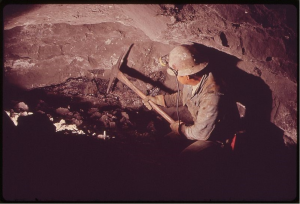 The Najavo were among the most affected by this neglect. Private companies hired Navajo workers and did not alert them to the dangers of the work. In 1951, the U.S Public Health Service conducted studies on Najavo mine workers without consent. The studies found high rates of cancer and other diseases in the mineworkers. Despite the research, Navajo workers were still not informed of the health effects they had been exposed to for decades. In 1990, the Radiation Exposure Compensation Act was passed and compensation was provided for uranium mill workers as well as many others exposed to dangerous radioactive materials.  The Navajo people were largely excluded from this act because of problems with eligibility. Changes made to the legislation in 2017 and 2018 has compensated many Najavo workers. As of April 2018, more than 2.2 billion dollars in claims have been approved. 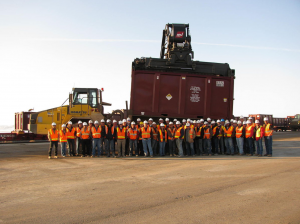 UMTRA Project staff after the 1 millionth ton of radioactive material transported from the Moab site to the disposal site near Grand Junction. Public domain image courtesy of Wikimedia Commons.

Uranium mills in Utah produced 16 million tons of contaminated tailings. While most of the Uranium had been removed from the soil, it still contained radium and other radioactive material.  The UMTRA project, or the Uranium Mill Tailings Remedial Action project, was created to deal with these tailings. The project has removed around 62% of the tailings, taking them from the banks of the colorado river and depositing them via train to a permanent disposal area near Grand Junction, Colorado. In October of 2019, 93,000 tons of tailings were cleaned up from the site, and over 10,000,000 tons have been removed so far.